Travaille D’Amour
(aka Labor of Love)

In the early fall of 1986 my college roommate (Scott, owner of SP Drummer Wines) and I jumped into his 70’s International Scout and gobbled up the miles between Davis and the wine country in search for fruit for some garage wine.  Armed with two (slightly used) plastic garbage cans, picking knives and a few Kilos of HUTZPAH, we sped towards Napa. The blaring saxophone notes of a band called “Morphine” rattled the car windows and slightly rearranged our kidneys but this only heightened our sense of euphoria.  In our minds, we were Billy and Wyatt (Easy Rider), riding across the plains on our choppers, looking for adventure.  Not to put Napa residents down too much… (some of my best friends live and work in Napa) but we could not even speak to a winemaker without an appointment, much less get permission to take some grapes.  Refusing to even consider retreat, we forged our way to the north of the four-letter valley, through Knight’s Valley (nothing but cows and prunes at the time) and ended up in Alexander Valley. We stopped at a big white barn next to a vineyard and introduced ourselves to the folks.  “Sure” said Jim, “go ahead to block number.3, right by the road here (pointing) there’s a lot of Pinot Noir left on those vines, pick anything you want”.  I made two wines from those grapes in 1986; a dry rosé named “Eye of the Swine” and a Red, a single-vineyard Robert Young Pinot Noir I named “Spice –Mélange” , (homage to Frank Herbert’s “Dune” trilogy).  I have made Pinot Noir every year since then except for 1987 when I worked in Pauillac with Bordeaux varieties.  I nearly got flogged by an angry mob of Chateau Lafite Rothschild employees for bringing a bottle of Burgundy to  one of the Friday afternoon “let’s greet the weekend with some alcohol” – but that is another story.

In November, we released our 2006 Russian River Valley Pinot Noir, all 1,200 cases of it.  I have never seen a wine with such a short half-life.  As we speak, I think there are 200 cases left in the warehouse, mostly spoken for by this distributor or another.  If you have met me, you probably know that I do not like talking about wines that I make much less describe them.  In this case, I am going to make an exception and tell you that this wine is DA BOMB.  If you like a perfect balance between old-world finesse and new world fruit and complexity – make sure you put your hands and lips on a bottle (or a glass if you are so inclined). This wine will age well (although I would not keep Pinot Noir much longer than 10 years).  If you have had some of the Pinot I made in a previous life then this is close in profile to the rich 2001 Robert Thomas Pinot Noir (still drinking great, had a bottle recently).

Raised by Dolphins in the Sahara Desert, made his first $3 fortune mowing the neighbor's lawn 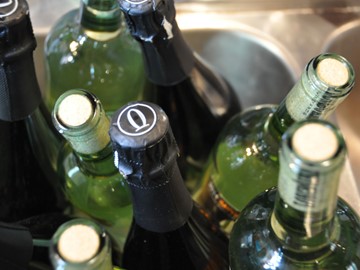